Diplodocus is a genus of extinct diplodocid sauropod dinosaurs that lived 154 to 152 million years ago. It is one of the most common dinosaur fossils found in the Morrison Formation along with other sauropods like Barosaurus, Apatosaurus, Brachiosaurus, Camarasaurus and Brontosaurus. 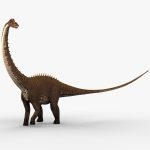 Like other sauropods, Diplodocus had a long neck and long tail. It had a small head (compared to its overall built). The nostrils were on the top of the head. They had a small braincase. It had peg-like teeth on their front-jaw. Their front legs were a little shorter than their hind legs. It had just one claw (unusually large compared to other sauropods) in its front limb. Their ribs were not attached to their backbone. Their tail, probably used to maintain counterbalance the neck, carried around 80 caudal vertebrae. Their neck carried around 15 vertebrae.

The first fossil remains were found in 1877, at Cañon City in Colorado, by Samuel Wendell Williston and Benjamin Mudge. It was named Diplodocus longus by American paleontologist Othniel Charles Marsh in 1878. Many Diplodocus species have been found and described between 1878 and 1924. Even though Diplodocus remains are commonly found in the Morrison Formation in Montana, Wyoming, Colorado and Utah, yet the skull has never been found.

Original type species D. longus is known from two complete specimens and many other fragmentary caudal vertebrae found in the Morrison Formation of Colorado. Several other complete specimens have been attributed to D. longus, but detailed research suggested that original fossil lacks the essential features to set aside for comparison with other specimens. This is the reason it is called a nomen dubium, and it is not ideal to call it a type species of a well-recognized genus like Diplodocus. This is why many paleontologists believe D. carnegii should be declared as the new type species for this genus.

carnegii (i.e., D. carnegiei), is the best-known species of this genus. The species, named after Andrew Carnegie, is known from a near-complete skeleton collected by Jacob Wortman. John Bell Hatcher named and described the species in 1901.

hallorum was first described as Seismosaurus halli by Gillette in 1991 from a partial skeleton comprising pelvis, ribs and vertebrae. The specimen NMMNH P-3690 was found in the year 1979.

The generic name has come from Greek words διπλός (diplos) meaning “double” and δοκός (dokos) meaning “beam,” citing its double-beamed chevron bones in the under part of the tail.

It is believed that they were terrestrial creature living in herds. They were primarily browsers feeding on bushes, ferns etc. Marsh and Hatcher said that Diplodocus lived in aquatic environments like other sauropods like Brachiosaurus and Apatosaurus.

There is no direct evidence of its mating and nesting adaptations, but it is believed to be like other sauropods. It is believed that their tail, which was capable of making loud noises, was used for defensive purpose. In fact, their size played a huge role in dealing with predators like Allosaurus and Ceratosaurus. Given their large body and long neck, they probably had an avian-like respiratory system.

Published on November 24th 2015 by staff under Reptiles.
Article was last reviewed on 16th September 2019.