Camarasaurus is a genus of extinct giant sauropods that lived around 155 and 145 million years ago. They were smaller compared to other sauropods, like Brachiosaurus and Brontosaurus. 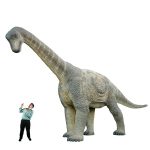 Camarasaurus was a long-necked sauropod with long skull and spoon-shaped teeth evenly placed along the jaw. They had a square shaped skull and blunt snout with many fenestrae. It had pillar-like legs with a 5-toed foot. The inner toe possessed a sharp and long claw that was probably used for defense against enemies. Their hind legs were a bit shorter than their rear legs. Their spinal cord was enlarged near the hips. It had a long tail. However, their neck and tail were shorter than other sauropods.

First Camarasaurus remains, a few scattered vertebrae, were found by Oramel W. Lucas in 1877 in Colorado. Paleontologist Edward Drinker Cope paid to get hold of the bones, and he named it that year. Later, Othniel Charles Marsh, his rival in the ‘Bone Wars,’ named some of his sauropod findings Morosaurus grandis. But today, most paleontologists believe those to be Camarasaurus specimens.

A complete Camarasaurus skeleton was recovered in 1925 by Charles W. Gilmore. The type species C. supremus (meaning “biggest chambered lizard”) was named by Cope from the original specimen. It is one of the largest sauropods found in the late Jurassic Morrison Formation. Other species C. grandis (meaning “grand chambered lizard”) was named in 1877, while C. lentus was named in 1889. C. lewisi, which was first assigned a genus Cathetosaurus, was named in 1988. Scientists believe that C. supremus may have directly evolved from C. lentus

In 1992, a partial skeleton remains of Camarasaurus grandis was discovered at the Bryan Small Stegosaurus Quarry of the Morrison Formation near Canon City, Colorado. Camarasaurus remains have been recovered from several places like Utah, Wyoming, Colorado and New Mexico.

One fossil record, consisted of two adults and one juvenile, unearthed by the Division of Vertebrate Paleontology of the University of Kansas Natural History Museum and Biodiversity Center, in northeast Wyoming, made paleontologists believe that they lived in family packs or in herds. Camarasaur eggs have also been found in lines. It made paleontologists believe that they did not take care of their eggs.

The strong and robust teeth of the Camarasaurus were more developed than most other sauropods. They probably had processed food inside their mouth before swallowing. Scientists believe that Camarasaurus was able to eat coarser plant material thanks to their powerful teeth.

Published on October 28th 2015 by staff under Reptiles.
Article was last reviewed on 16th September 2019.