Stegosaurus is a genus of extinct, armored stegosaurid dinosaur that lived 155 – 150 million years ago. Remains of 80 individuals have been unearthed from the upper Morrison Formation in the western United States. It coexisted with large predatory dinosaurs, like Ceratosaurus and Allosaurus. 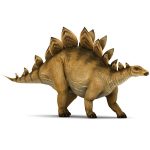 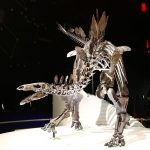 Stegosaurus was a large, heavily built animal known for its unusual appearance. It had a long and narrow skull; and small, flat and triangular teeth. Their hindlimbs were longer than their forelimbs. All four limbs were backed up by pads behind their toes. It had three short toes on the hind feet, and they had five toes on the forefoot. It had two pairs of spikes horizontally ending near the end of their tail. Compared to its overall built, their brain size was similar to that of the size of a walnut. Their actual brain anatomy is not well known.

One of their distinct features was their seventeen flat highly modified kite-shaped osteoderms on their heavily rounded back. They were directly not joined to the skeleton, but it was stuck to the animal’s skin. The largest plates were around 60 cm wide and 60 cm tall. Some theories even suggested that the plates could have been mobile. There are several hypotheses regarding the usage of the plates, such as body temperature control, intimidating enemies or sexual display. Some researchers have blown off the sexual display theory as they did not have any sexual dimorphism

Its short neck and ‘head held low on the ground’ posture (probably not more than 3.3 feet) suggests that they were ground feeders. Stegosaurus was quadrupedal, but there were some theories that suggested that they could stand up on their hind legs using their tail forming a ‘tripod.’ Their track of footprints found by Matthew Mossbrucker suggests that they lived in herds consisting of adults and babies. There are several theories regarding the usage of spikes, such as defense and display among others. Some scientists have criticized the defense theory as they were ill-placed and too fragile.

Published on October 5th 2015 by staff under Reptiles.
Article was last reviewed on 16th September 2019.