Ceratosaurus is an extinct genus of theropod dinosaur that lived during the Kimmeridgian to Tithonian period (156 million to 145 million years ago). They dwelt alongside other dinosaurs like Allosaurus, Diplodocus, Apatosaurus, Stegosaurus, Camarasaurus and Torvosaurus. 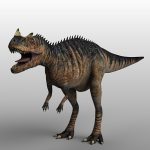 Ceratosaurus possessed quite a large head compared to its bulky figure. They had a strong S-shaped neck and a short horn on its snout. It also had unusually long teeth; short four-fingered ‘hands’ with sharp claws; and a massive thin and flexible tail with high vertebral spines. Like Allosaurus, Ceratosaurus also had small horn-like ridges (formed by lacrimal bones) in front of their eyes.

Ceratosaurus were savage, carnivorous creatures. In its habitat, they competed with other predatory dinosaurs like Allosaurus and Sauropods. Scientists believe that Ceratosaurus stayed and hunted in packs. Some believed that they were scavengers.

Unlike Allosaurus, their range is known from just a handful of skeletons. In the US, Ceratosaurus specimens have been found in Cleveland Lloyd Dinosaur Quarry in central Utah and the Dry Mesa Quarry in Colorado. The type species, Ceratosaurus nasicornis, was first described in 1884 by Othniel Charles Marsh. Other two species – C. magnicornis (discovered in the Fruita Paleontontological Area, outside Fruita, Colorado) and C. dentisulcatus (found in the Lourinha Formation in Portugal) were described in 2000. However, the validity of these two species has been challenged by several paleontologists. Two additional disputed species are C. ingens and C. stechowi.

Published on September 7th 2015 by staff under Reptiles.
Article was last reviewed on 16th September 2019.