Apatosaurus, an extinct genus of sauropod dinosaurs, lived around 152 to 151 million years ago. For more than a century, Brontosaurus has been wrongly considered as a junior synonym for Apatosaurus However, a detailed study published in 2015 suggested that Apatosaurus and Brontosaurus were distinct from each other. 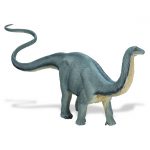 Apatosaurus was a heavily built animal with a long neck and a long tail. Their forelimbs were shorter than their hindlimbs. They possessed a small brain structure compared to their overall body structure. They had squared snout, chisel-like teeth, deeply bifurcated neck vertebrae, a hollow backbone and column-like legs. Their nostrils were placed on the top of their head. Their cervical vertebrae were more robust and stouter than other diplodocids. They had long ribs, and less elongated and more heavily constructed cervical vertebrae. It had a single claw on each foreleg and three on each hindleg.

Apatosaurus shared their habitat with other dinosaurs like Stegosaurus, Camarasaurus, Allosaurus and Diplodocus. Even though many sauropods lived in herds, yet it is believed that Apatosaurus were solitary and terrestrial. They could not move fast because of their heavy built. They could cover around 20 – 40 km area per day. Some theories suggest that they were non-selective browser, probably feeding on ferns, cycadeoids and algae. It is believed that they used their neck for intraspecific combats; and used their tail as a whip to produce loud sounds. There are several hypotheses regarding the use of its single claw on the forelimb, such as defense, or grasping objects, or feeding. They had a long lifespan.

The genus name Apatosaurus comes from Greek words “apatēlos” meaning ‘deceptive’ (“apatē” meaning ‘deception’) and “sauros” meaning ‘lizard.’ Marsh, then a Professor of Paleontology at Yale University, gave the name because of its chevron bones that were not similar to those of other dinosaur genus, but identical to with mosasaur chevrons.

In 1877, Othniel Charles Marsh, then a Professor of Paleontology at Yale University, described the type species Apatosaurus ajax, from an incomplete juvenile skeleton. The holotype was unearthed on the foothills of the Rocky Mountains. The remains were shown as distinct from Atlantosaurus. Marsh, after two years, revealed the discovery of a new sample that was larger and more complete. All specimens considered as belonging to the Apatosaurus were found from the Morrison Formation. The specimen, which is now on display at the American Museum of Natural History, was unearthed in the Morrison Formation in 1898 by Walter Granger. The very first skull sample was found in 1909 during an expedition led by Earl Douglass. But no mention of Apatosaurus skull was found till the 1970s when David Berman and John Stanton McIntosh redescribed the skulls of Apatosaurus and Diplodocus. It 2005, several A. ajax specimens (date from late Kimmeridgian to early Tithonian ages) were found. Species Apatosaurus louisae was described in 1916 by Holland. This species was first known from a sample discovered in Utah.

Published on September 30th 2015 by staff under Reptiles.
Article was last reviewed on 16th September 2019.