Brachiosaurus is an extinct genus of sauropod dinosaur that lived around 156 to 145 million years ago. Some recent dating studies suggested that Brachiosaurus survived till 140 million years ago (the start of the Cretaceous period). Soon after the discovery it was declared as the “largest known dinosaur.” 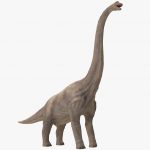 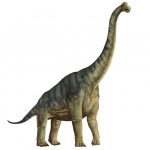 Brachiosaurus was a hugely built sauropod dinosaur with a disproportionately long neck, a large trunk and proportionally small head. Its skull had wide and robust muzzle. It also possessed thick jaw bones with spoon–shaped teeth. Their forelimbs were larger than their hind limbs, unlike other sauropods. It had a long and muscular tail that was proportionally shorter compared to its neck size and overall built. They had air sacs in the neck and trunk. It had a deep ribcage. Their appearance resembled the appearance of the modern-day giraffe.

The genus, along with the type species B. altithorax (cataloged as FMNH P 25107), is based on a partial postcranial skeleton sample. The fossil remains were found in 1903, in the Morrison Formation, by Elmer S. Riggs and his team from the Field Columbian Museum, now known as Field Museum of Natural History, in Chicago. However, it was not the very first Brachiosaurus specimen that was unearthed. A sauropod skull found near Garden Park, Colorado, in 1883, was then described as Brontosaurus; but in 1998, it was described as Brachiosaurus by Kenneth Carpenter and Virginia Tidwell. Since there are no overlapping parts between this skull and FMNH P 25107, it was classified as Brachiosaurus sp. Brachiosaurus materials, especially bone remains, have been reported and described from Colorado, Oklahoma, Utah and Wyoming.

The name Brachiosaurus has come from Greek words “brachion” meaning ‘arm’ and “sauros” meaning ‘lizard.’ Riggs assigned the name because of its unusual arm size, unlike other sauropods. The type species was given the name “altithorax” because of its unusually wide and deep chest cavity. In Latin, “altus” means ‘deep’ and “thorax” means “breastplate, cuirass, corslet.”

It is believed that Brachiosaurus was a terrestrial creature. For long, it was assumed that sauropods spent a lot of time in the water as it was difficult for them to carry their weight on land. Elmer S. Riggs was the first to suggest that the feet and limbs of Brachiosaurus were not wide enough to support the heavy animal on the land.

The largest known meat eaters of the late Jurassic period were Allosaurus, Torvosaurus and Ceratosaurus, but given the size of the Brachiosaurus is not believed to have any predators. Their whip-like tail was also a good defense against their enemies.

Paleontologists believe that they lived in herd and migrated once food source is depleted. They hatched from eggs. It is believed that Sauropods laid their eggs while walking. It also led to the hypotheses that they did not take care of their eggs and babies.

They were primarily browsers. They are likely to feed on around 260 pounds of plant material each day. Like other Sauropods, they had a long lifespan. Recent research suggested that they were a warm-blooded creature. It probably had a large and powerful heart (and high blood pressure) to pump up oxygenated blood to its brain.

Published on October 9th 2015 by staff under Reptiles.
Article was last reviewed on 16th September 2019.