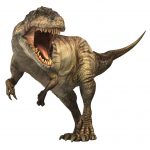 It had a massive body with a slender and elongated skull. Its brain was much small compared to its head. They had huge jaws with long, flat, serrated teeth. They had three-fingered clawed forelimbs. The mid-dorsal vertebrae had high spines. It had a pointed tail that helped it to balance its large body, especially while running or taking a turn.

Paleontologists believe that they were the apex predator in their ecosystem. They probably roamed and hunted in packs. Their prey included Andesaurus and Limaysaurus. It is believed that they also attacked Argentinosaurus. They probably had no enemies in their natural environment, but abelisaurid theropod Ekrixinatosaurus could be its competitor. They shared their habitat with Andesaurus, Limaysaurus, Nopcsaspondylus, Iguanodont and ornithischian. Other small species that Giganotosaurus shared its environment with are Alnashetri, Bicentenaria, Buitreraptor, Pterosaurs and primitive snake Najash.

On 25th July, 1993, amateur fossil hunter Rubén Dario Carolini found the most complete specimen in Patagonia, which is now considered as the Candeleros Formation. It was described a year later. In September, 1995, Rodolfo Coria and Leonardo Salgado released the detailed description in the journal Nature. The holotype specimen was around 70% complete. It had parts of the skull, lower jaw, arms, pelvis and most of the backbone. Another sample comprising of a fragment of a lower jaw was found by Jorge Calvo in 1988.

Published on September 29th 2015 by admin under Reptiles.
Article was last reviewed on 16th September 2019.