Spinosaurus, an extinct genus of theropod dinosaur, roamed the earth around 112 to 97 million years ago – during the Cretaceous era. Its remains were first discovered in Egypt in 1912. It is believed that Spinosaurus, presumably a cold-blooded creature, was one of the largest known carnivorous dinosaurs, probably larger than Giganotosaurus or Tyrannosaurus rex. 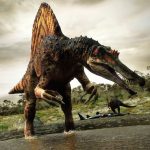 Spinosaurus was a bipedal dinosaur with long neural spines that grew out of the animal’s back vertebrae. Popularly known as sail, the spines could grow up to 7 feet, and they were presumably connected to one another with skin. Their spines were covered in fat that formed a hump. Paleontologists believe that it was brightly colored. There has been a great debate regarding the function and the evolution of the sail. It is believed that they did not have many predators, but they might use it to ward off enemies. Other researchers suggested they were used to regulate body temperature.

They had a narrow snout in front of their skull. Dal Sasso and others figured out that the body proportion of both Spinosaurus and Suchomimus were similar in relation to their skull-lengths. They had 6-7 teeth in the premaxillae, while another 12 in both maxillae.

Very few fossils have been recovered as of now. The first skeleton remains were unearthed by Richard Markgraf in 1912 in the Bahariya Formation in western Egypt. BSP 1912 VIII 19, the holotype, was described by German paleontologist Ernst Stromer in 1915. Stromer stated that the fossil was 97 million years old. During the Second World War, a British bombing raid that severely damaged the holotype housed at the Paläontologisches Museum München in Germany. However, detailed dossier and drawings of the specimens remained.

Specimen NMC 50791, discovered in the Kem Kem Beds in Morocco, is now held by the Canadian Museum of Nature. MNHN SAM 124, found in Algeria, is now at the Muséum National d’Histoire Naturelle in France. BM231, which is now housed in the collection of the Office National des Mines in Tunis, was recovered from the Chenini Formation in Tunisia. Sample UCPC-2, which sits at the Paleontological Collection of the University of Chicago, was found in the Moroccan Kem Kem Beds. MSNM V4047, now housed in the Museo di Storia Naturale di Milano in Italy, was also discovered from the Kem Kem Beds.

Spinosaurus was carnivorous. Their food primarily consisted of aquatic creatures, such as sawfish, large lungfish, giant coelacanths and sharks.

Scientists believe that Spinosaurus was terrestrial and depended on aquatic prey. A recently published study stated that their habitat consisted of both water and land. Spinosaurus was the first dinosaurs that were able to swim. In fact, they spent most of the time in the water. In land, they primarily walked on their hind legs with occasional crouching posture. However, an entire bipedal condition has been in question among scientists asserting that Spinosaurus used their arms (i.e. forelimbs) like that of a quadruped.

Published on August 29th 2015 by staff under Reptiles.
Article was last reviewed on 16th September 2019.