The Argentinosaurus is a huge and giant-size creature that was basically a plant-eater. These animals walked the earth about 96 to 94 mya, and there have been very few information in the hands of the scientists about their everyday life. 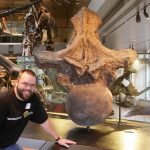 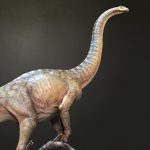 Picture of a Argentinosaurus

It was in 1987 that the remains of the animal were excavated for the very first time by an Argentinian rancher. Interestingly, the huge foot of the Argentinosaurus huinculensis was mistaken for a large piece of log wood, and the big size vertebra, about the size of a human was also dug out, along with.

Both these scientists also specified the timeframe of the discovered animal that lived during the late Cenomanian faunal stage of the Cretaceous period, approximately 96 to 94 million years back.

Very little is known about this giant dinosaur Argentinosaurus since information that could be gathered from bits and pieces from their skeleton-fossil was not enough to have a complete inference.

Argentinosauruses were not solitary creatures, but would move in herds of around 20 individuals, foraging for food in densely vegetated regions to feed. When the food resources are exhausted, they would move on to a different place to find a new region to graze.

It’s evident that most of the contemporary species didn’t dare attack this gigantic animal except for the huge and massive Giganotosaurus.

The Argentinosaurus were herbivorous (plant-eating) animals, feeding on leaves, seed and fruit especially from the high branches of the conifers.

Published on August 9th 2018 by staff under Reptiles.
Article was last reviewed on 16th September 2019.