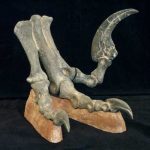 It is believed that Utahraptors stayed and hunted in packs. At times, they attacked their prey when they bogged down in thick mud or quicksand. In fact, they also attacked even large sauropods and ankylosaurids.

Utahraptor’s holotype specimen is fragmentary. It only had skull fragments, claws, a tibia as well as some caudal (tail) vertebrae. Phylogenetic evidence suggested that they had feathers. Their bones were hollow, but strong. They had robust short legs that were primarily made for strength rather than speed. However, they are known to be a fast sprinter. They had large and sharp claws on their second toes.

The exact range of this species is not known. The first fossil sample of this genus was found in 1975 by in Jensen in the Dalton Wells Quarry in Utah, near Moab town. It got much attention after a large foot-claw was found by Carl Limoni in October, 1991. In the same year, more skeleton remains were uncovered in Grand County, Utah. Radiometric dating showed that parts found in Cedar Mountain Formation were deposited around 124 million years ago. In the year 2001, Kirkland and others found a fossil block of sandstone in Utah carrying six individuals that includes one adult, four juveniles and one baby.

Published on August 24th 2015 by staff under Reptiles.
Article was last reviewed on 16th September 2019.