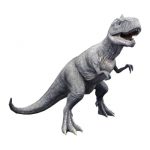 In 1896, the Majungasaurus was first discovered for the first time by a French army officer along the Betsiboka River in Madagascar. Decades later, in 1976, a French paleontologist and dinosaur expert named Philippe Taquet came across an incomplete fossil – a part of the cranium in the skull cap, close to the brain – from the Majunga, AKA Mahajanga, a province in Madagascar. Again, it was this very site from where the remains of the unidentified Majungasaurus was discovered for the very first time, eight decades before.

Taquet, along with a colleague, mistook the fossil for Majungatholus, a relative of the herbivore Pachycephalosaurus that lived in modern-day North America. It had a dome head with the skull being 9 to 10 inches thick. Finally, in 1996, the first decent skull of the Majungasaurus was excavated.

This successful excavation eventually proved that the remains of the beast that Taquet discovered was not of a Majungatholus, which he initially thought to be, but actually belonged to another giant reptile Majungasaurus. Since then, enough studies have been conducted, based upon the skeletal materials and the well-preserved skulls that were unearthed from different sites.

Further studies suggested (though not concluded) that the Majungasaurus was more closely related to India’s abelisaurids, rather than with those that were discovered in South America or continental Africa, since the land mass of Madagascar was connected to mainland India millions of years ago. This data has important biogeographical implications in the advancement of studies related to this theropod species.

In the latter years, the animal was noted for cannibalism by BBC One, and eventually, by several other documentaries. However, considering the fossil cases of other active cannibals, as also, the modern day cannibalistic Komodo Dragons or other scavenging animals, including humans that showed cannibalistic behavior during famine or scarcity of food, the hypothesis about the cannibalism of this dinosaur species is still to be established.

The most recent size estimates have put the animal at around 8 meters highest. The Majungasaurus had a pair of crests along with a small spike on the head. Its arms were tiny, in fact, even smaller than those of the Tyrannosaurus rex. Like other abelisaurid animals of the period, the Majungasaurus was also a bipedal predator that had a short snout.

However, the facts about the forelimbs, except for their size, are not entirely known. The hindlimbs of the theropod were longer, as well as, heavily-muscled and stocky. It was different from the other abelisaurids by its characteristic wider skull.

The top part of the snout of the Majungasaurus had a rough texture. It also bore a thick bone along with a rounded horn on top of the head (which was initially mistaken for the pachycephalosaur’s dome, during discovery).

By evolution, the number of teeth was more in this species, and the dentition pattern in both the jaws of the Majungasaurus was also different than most other fellow abelisaurid theropods.

In its ecosystem, the Majungasaurus was the apex predator during its time, usually feasting on sauropods like the Rapetosaurus. Like the T-rex, it is also one of the rare dinosaurs about which direct evidence of cannibalism has been discovered.

However, as mentioned earlier, it is still not clear whether they were actively cannibalistic, hunting down their own species regularly, or would eat only the dead or injured individuals.

By virtue of their sharp teeth that were curved backward, the bite of the Majungasaurus would not let the prey escape. The jaws of the animal were also adapted for gripping firmly, rather than slashing.

Published on December 25th 2018 by staff under Reptiles.
Article was last reviewed on 16th September 2019.