The Great auk was a flightless bird that became extinct in the middle of the nineteenth century. It is the only modern species that falls in the genus Pinguinus. This bird had great importance in Native American cultures – both as a symbolic item and also a food source. It was one of the species described in Systema Naturae, an 18th-century work by Carolus Linnaeus. In the book, it was named Alca impennis. 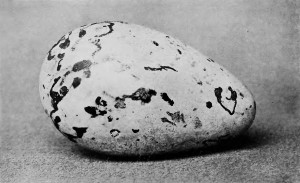 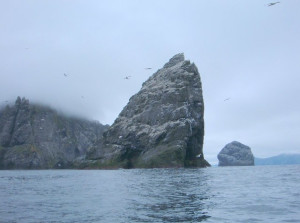 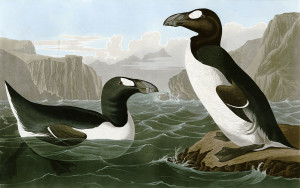 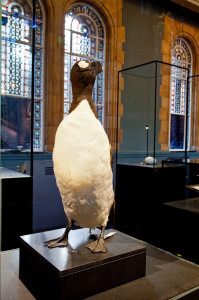 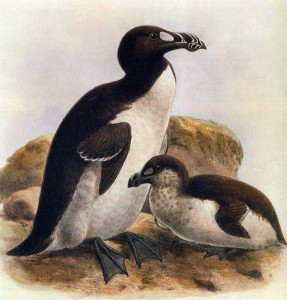 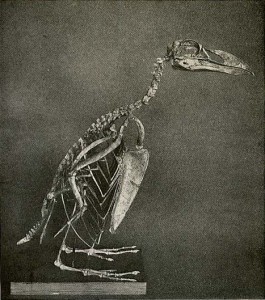 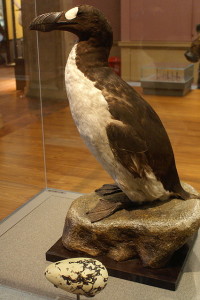 DNA sequences analysis has confirmed that the Razorbill is the closest relative species of Great auk. In fact, Little auk (dovekie) is also closely related to Great Auk. There were discussions of cloning this bird from a diverse pool DNA collected from museums around the world.

They used to feed in shoaling waters, mostly in a group. After the breeding season, they could be seen up to 500 kilometers away from the land. They are known to dive up to 245 ft on average to catch their prey. Great auk’s ability to dive deeper into the ocean water reduced their competition with other alcid species. They are known to have the ability to hold its breath for fifteen minutes, which is longer than a seal could. In winter months, they used to migrate to the south in pairs or in groups. Great auks are known to react to noises.

Their vocalization included a hoarse scream or a low croaking.

The Great auk was found in coastal waters along northeastern United States, Canada, Norway, Iceland, Greenland, Ireland, Faroe Islands, France, northern Spain and Great Britain. The nesting colonies preferred rocky islands with sloping shorelines. It is believed that they had more than twenty breeding sites in their historical range.

Mating used to take place in extremely social and dense colonies, primarily in May. Some accounts suggest that pairs used to mate for life. They lay one egg each year, between May to early June. If the first egg did not survive, they used to lay a replacement egg. They did not breed if there was a shortage of food.

Both the male and the female incubated the egg for six weeks. Hatchlings were downy and gray in color. The chicks were able to leave the nest site after 2 – 3 weeks accompanied by their parents.

They were killed in large numbers because of the high demand of their down (used to make pillows) in the European markets. It was a convenient food source for European explorers to the New World.

Their European population was reduced to a small number by the middle of the 16th century. Predation by polar bears at their nesting sites was one of the reasons.

This species disappeared from the Funk Island by 1800.

The last two individuals were killed off the coast of Iceland on 3rd July, 1844. Tales of unconfirmed sightings continued for the next two decades. However, a lot of people consider the record of a flightless bird, seen in 1952, was the last sighting of this species.

Thousands of isolated bone remains can be found in several museums across the world; while just 24 complete skeletons exist.

The reference of this extinct bird can frequently be found in art and literature. They are mentioned in several short stories, children’s stories as well as other fictional works. American painter Walton Ford depicted this species in two paintings named ‘Funk Island’ and ‘The Witch of St. Kilda.’ Great auks are also present in ballets and poems. Many Maritime Archaic people are known to be buried with great auk bones.