Dodo, belonging to the family Columbidae, was a flightless bird endemic to the island of Mauritius. The first recorded mention of this bird came from Dutch sailors in 1598. Dodo was considered by many as being mythical creatures. 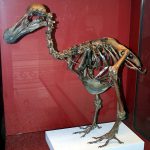 The appearance of this species is known from the 17th century written accounts, paintings and drawings. With varying hypothesis, its exact appearance still stays unsolved to an extent.  There are very few illustrations that have been drawn from live specimens. Widely accepted views suggest that they had brownish-grey plumage; grey, naked head; a tuft of tail feathers; yellow feet and a black, yellow, and green beak.

Early scientists described this bird as a small ostrich, an albatross, a rail and even a vulture. In 1842, Danish zoologist and herpetologist Johannes Theodor Reinhardt was the first to describe this species as ‘ground pigeons.’ He came to the conclusion after researching dodo skulls from the Royal Danish collection at Copenhagen. His views were later supported by Hugh Edwin Strickland and Alexander Gordon Melville in their paper ‘The Dodo and Its Kindred’ in 1848.

Dodos were less aggressive than Rodrigues solitaire and intraspecific battles were quite rare. They used their beak for defense.

Dodo, endemic to Mauritius, inhabited forests in the drier coastal regions of south and west of the island. A little population also inhabited mountain regions. Their habitat was dominated by Pandanus and tambalacoque trees as well as endemic plants.

Dodos were monogamous. It has been suggested that mating ritual included ‘clapping’ with their ‘hand.’ With no predators around, they nested on the ground. They laid a one-egg clutch. The egg was hatched after 46 days. Both male and female took part in taking care of the young.

Hunting (for meat) is the primary cause of its extinction, which went unnoticed for some time. They were killed in thousands by sailors (sometimes killed as many as fifty at a time). Their eggs and chicks were also easy prey to the animals introduced to the island by the sailors.

It had also been suggested that the Dodo population might have been low even before humans arrived. If they had occupied remote places in the island, then their extinction could not have been that rapid.

Their exact extinction timeline is not known, but most widely accepted date is 1662. The last claimed sighting came from Isaac Johannes Lamotius’ hunting records in 1688.

The etymology of the word ‘dodo’ is not known. However, it is believed that it came from Dutch word ‘dodoor’ which means ‘sluggard.’ Dodo was referred to as ‘Walghvogel’ in Vice Admiral Wybrand van Warwijck’s journal. In Dutch ‘walghe’ means ‘insipid’ and ‘vogel’ means ‘bird.’