The Edmontosaurus is a genus of duckbilled dinosaurs (Hadrosauridae) that roamed the planet in the Late Cretaceous Period. In fact, the members of the genus were incredibly gigantic, one of the largest in North America, and includes two valid species – Edmontosaurus regalis and Edmontosaurus annectens (with the former being the type species).

The Edmontosaurus was contemporary to Tyrannosaurus Rex, Triceratops, Pachycephalosaurus, and Thescelosaurus, and some paleontologists synonymize them with the disputed Anatosaurus or Anatotitan, which are now generally considered as the synonyms of Edmontosaurus.

These herbivores were one of the last non-avian dinosaurs that grazed the plains of the Canadian province of Saskatchewan during the final years of the Cretaceous period, just prior to the mysterious mass extinction. 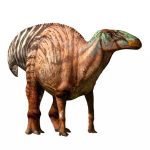 The first edmontosaurus fossil was discovered first in Canada’s Alberta in 1917 by paleontologist Lawrence Lambe. After sporting several scientific names, it was Lambe who successfully renamed the newly-discovered genus as ‘edmontosaurus’.

However, back in 1871, fossils were also discovered in Alberta, Canada, that were unfortunately lost since then. Although, that fossil is thought to be belonging to a dinosaur belonging to another genus, and was named Trachodon cavatus by Edward Cope, who initially discovered it.

In 1892, again, parts of the fossil of a dinosaur had been discovered by another veteran paleontologist Othniel Charles Marsh that all were later studied to be the parts of the same genus that Lambe discovered.

Lawrence Lambe named the dinosaur after the Edmonton formation site (also known as the Horseshoe Canyon Formation) in Alberta, where the giant animal was discovered. Later, two mummified Edmontosaurus fossils were also unearthed in Wyoming. Parts of fossilized skeletons (including skull) have also been unearthed from places including Nebraska, Montana, and New Jersey.

Because of the discovery of skin samples and food residue in the creature’s stomach, several unique features and characteristics of the newly discovered dinosaur could be studied well.

This prehistoric creature is different from its genus members in the sense that, it lacked the characteristic bony crest atop its head, which the other hadrosaurids had.

Interestingly, biologists have discovered the fact that the Edmontosaurus had loose skin around its face, which it could blow up like a balloon. The exact purpose of this is, however, not yet known.

They moved on both two, as well as four legs. However, while running, they had to take the help of all four. They used the two hind limbs usually when standing up to reach the high branches of trees.

The mummified specimens that were unearthed had some preserved skin. This helped the researchers study its texture, though the tone or color of the skin is still unknown.

The edmontosaurus preferred living in swampy environments. Since the discovery of the very first fossil of the reptile, it has been found throughout North America. These discoveries suggest that they were probably nomadic animals that would travel or migrate in large groups to stay safe from the then apex predators.

Its loose facial skin is thought to have been used to attract a mate. However, it is also thought to have been for the purpose of warding off competitive males during intra-species fights especially during the season of reproduction/mating or even to ward off their predators.

Edmontosaurus was relatively defenseless against any large carnivores and were unable to escape or outrun the contemporary meat-eating species, and hence, had to rely on maneuvering them by living and traveling in large herds. These gigantic animals might have also had keen senses of vision, hearing, and smell for assisting them in locating and avoiding the forthcoming dangers.

As the scientists have measured the creature’s relative brain to body weight (EQ), the ornithopod’s natural level of intelligence was midway among the other dinosaurs of the period.

Both the ancient herbivore species of edmontosaurus usually preferred plant matters like tough pine needles, cones, seeds, and twigs. They also had an appetite for low-lying plants including ginkgos, cycads, and conifers.

Published on December 21st 2018 by staff under Reptiles.
Article was last reviewed on 16th September 2019.