The Coelophysis is the oldest dinosaur in the continent of North America and roamed the earth during the Late Triassic Period. Being discovered about 130 years back, it is also one of the oldest known dinosaur genera in the world. They get their name ‘Coelophysis’ from the Greek words ‘koilos’, meaning ‘hollow’, and ‘physis’, meaning ‘form’. Hence, the name “hollow form” is a reference to the reptile’s hollow vertebrae. 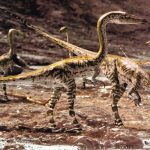 Picture of a Coelophysis

It was in 1889 that the Coelophysis bauri was named for the first time by paleontologist Edward Drinker Cope. However, the remains of the specimens found by that time were not enough to have conclusive evidence about the nature and characteristics of the new species.

Decades later, in 1947, in northern New Mexico’s Chama River valley, an entire area scattered with the remains of the creatures was discovered jointly by scientists Edwin Colber and George Whitaker.

To their surprise, quantities of fossils were unearthed, and many of them were complete skeletons. Such a striking and successful discovery made them conclude that this site housed a large group of these reptiles that gathered at a drying waterhole in order to obtain water since, during this period (Triassic era), there was a scarcity of water resulting from the uprising and fluctuating dry and hot temperatures.

Prior to their death (or maybe even after dying), they might have been fallen victims to a flash flood, resulting in their burial. Soon after this discovery, the Coelophysis went on to be one of the most famous dinosaurs.

Coelophysis was a delicately-built carnivore with a pair of slender legs bearing three-toed feet. Its pair of arms had four fingers each, although the last digits were considerably small. The head/skull of the creature bore a strong jaw lined with small but sharp and serrated teeth.

Practically, the dinosaur, was rather short, compared to the other medium-sized to gigantic reptiles that roamed the planet. Quite like the birds, they had hollow bones and skull, which allowed them to run at great speed.

The dinosaur’s large eyes were adapted to help them see clearly at long distances to watch out for predators and prey. Interestingly, they might have even displayed sexual dimorphism which was hypothesized by the paleontologists after two types of Coelophysis were discovered, with one being rather robust (probably the male), and the other relatively gracile (maybe the female).

The Coelophysis’ tail was long, but was designed with such interlocking structures that prevented them from moving it vertically (but side to side). Probably, by evolution, this helped the creature to use it as a rudder while running at top speed.

The Coelophysis would prefer warm environments that were more tropical with frequent rain. They were predators. These creatures are thought to have preyed on animals that were smaller by size than it was.

Though, there are also evidence which made the biologists opine that they might have also attacked larger creatures like thecodonts, prosauropods, etc., from time to time.

However, these carnivores may have hunted large prey in considerably larger packs, though there is no concrete evidence as yet in support of this defensive pack behavior. It is only the mass finding in New Mexico that might support this nature.

Discovery of a baby near the abdomen region of an adult has also stirred up the probability of these creatures cannibalizing their young ones. However, there are also chances that the juvenile Coelophysis might have been fossilized under an adult specimen. There is no other evidence, currently, to support their cannibalistic nature.

Diet: What did they Eat

These carnivores would rely upon a variety of arthropods (i.e., insects that were large during the era), smaller reptiles, and fish.

Published on November 23rd 2018 by staff under Reptiles.
Article was last reviewed on 16th September 2019.