Carolina parakeet, once very common within its native range, was a Neotropical parrot. Their population collapsed with the introduction of new settlements and gradual disappearance of deciduous forests. This bird became rare by the middle of the nineteenth century.

It was as early as 1832 when John J. Audubon annotated the decline of the bird. The last reported sighting outside Florida came in 1817, in Kentucky, east of the Mississippi River. After 1860, this species was rarely reported outside the swamplands of Florida. The last confirmed sighting of a wild Carolina parakeet came in 1910.

The IUCN (International Union for Conservation of Nature) put Carolina parakeet in the ‘extinct’ category in 1918. The species was declared extinct in 1939 by the American Ornithologists’ Union. 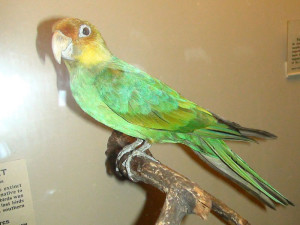 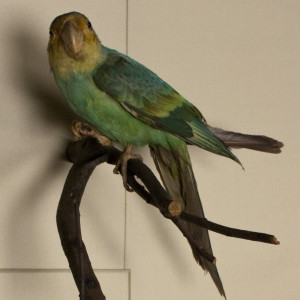 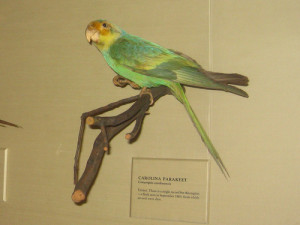 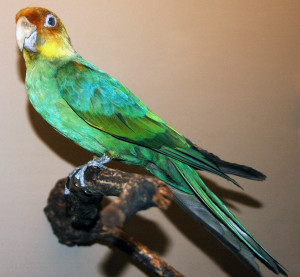 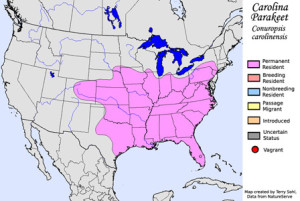 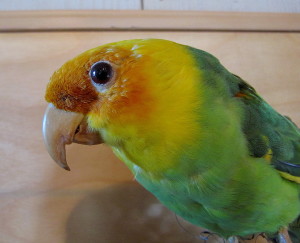 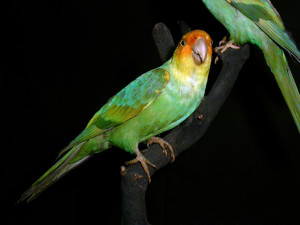 The species Carolinensis belong to Conuropsis genus – one of the New World long-tailed parrots’ variety that falls in the tribe Arini (such as Central and South American macaws). Tribe Arini, along with Amazonian parrots and some miscellaneous kinds, makes the Arinae subfamily.

A research of C. c. carolinensis’ mitochondrial DNA suggests that some of their closest relatives include the Golden-capped parakeet, the Sun parakeet, the Nanday parakeet and South American Aratinga parakeets.

There are two recognized subspecies with Carolina parakeet (i.e. C. c. carolinensis) being the nominate subspecies. The Louisiana subspecies (i.e. C. c. ludovicianus), which also went extinct at an earlier date (possibly early 1910s) was more bluish-green and was of subdued coloration.

Carolina parakeet’s plumage was primarily green with orange forehead and bright yellow head and shoulders. Their feet and legs were light brown, while thighs were yellow towards the feet and green towards the top. It’s beak was pale flesh in color, and the skin around the eyes was white.

Males and females were identical in color, but males were a bit larger than the females. Young ones were a bit different in coloration. Their plumage was green with pale underparts. They did not have orange and yellow coloration on their face and thighs.

Hatchlings were gray. Little green wings used to come along after 5 – 6 weeks. Fledglings had full plumage by the time they were 10-12 months of age.

C.c. carolinensis had the northern-most range of any known parrot in the Americas. This bird was found from Wisconsin, New York and New England to the Gulf of Mexico, Tennessee and Kentucky. Their native range also included the western part of the Mississippi River.

They used to dwell in wetland forests along swamps and rivers. They lived in hollow trees like sycamore and cypress. Carolina parakeet was known as being noisy. They used to live in huge flock of 200 – 300 individuals.

They fed on nuts and seeds of beech, cypress, hackberry, sycamore, maple, oak, elm and pine. Their diet also consisted of fruits like figs, grapes and apples.

They were known for their consumption of cockleburs, a plant recognized as an invasive pest in southern fields and farms.

In late 1920s, sighting came from Okeechobee County, Florida, but later that proved to be false.

In 1937, a few parakeets resembling C. c. carolinensis was filmed near Okefenokee Swamp of Georgia. Later, the American Ornithologists’ Union studied the video footage and came to the conclusion that they were feral parakeets.

Most details about this bird come from museum specimens and anecdotal accounts. Therefore, actual reasons behind its extinction are greatly speculative and unproven. The time-line of the final extinction was quite a mystery as it happened very fast in the early 20th century.

In the 18th and 19th century, deforestation and hunting played major roles in their extinction. Few reports suggest that illegal pet trade also played a role as they were used to reduce predation on corps in few places. Their colorful feathers were used in making women’s hats.

Noel F. Snyder, an American ornithologist, speculated poultry disease as a reason for their extinction, but no historical records suggest that the New World parrots were ever being afflicted by poultry diseases.

Researchers and historians have already called for a cloning project to de-extinct this species as its DNA can easily be extracted from museum taxidermies.