Albertosaurus is an extinct genus of tyrannosaurid theropod dinosaur belonging to the Clade Dinosauria. It lived in the western part of North America, around 70 million years ago, during the Late Cretaceous Period, alongside a diverse population of dinosaurs and other fauna. . Scientists believe that A. sarcophagus, the type species of this genus, was restricted in a range that falls in modern-day Alberta, a Canadian province. Some scientists recognize Gorgosaurus libratus as a second species. 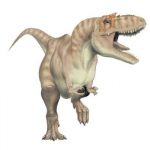 Albertosaurus was a bipedal creature with short two-fingered arms. It was relatively smaller compared to T-rex (type species of genus Tyrannosaurus). It had a big head; a short, S-shaped neck; sharp teeth; long and strong hind legs with a four-toed foot. It had 14-16 banana-shaped teeth on the lower jaw, and 17 – 19 on the upper jaw. Their hallux did not reach the ground. Some believe that this predator was on the top of their food chain on its ecosystem.

Its remains (the partial skull of the type specimen) were first unearthed in 1884, from the Horseshoe Canyon Formation alongside the Red Deer River, in Alberta, Canada, by geologist Joseph B Tyrrell. In 1892, the fossil samples were first studied by American paleontologist and comparative anatomist Edward Drinker Cope.

In 1910, American paleontologist Barnum Brown found a ‘bonebed’ of Albertosaurus at a pit alongside the Red Deer River. He and his team did not collect all the remains, but gathered up samples from all identified individuals. In 1997, The Royal Tyrrell Museum of Palaeontology resumed the fieldwork at the site. Fossil specimens have also been reported from the US states of Wyoming and Montana. Several specimens of albertosaurine have been collected from New Mexico and Alaska.

Albertosaurus dwelt in a semi-tropical environment with heavy vegetation. Their fossil remains were found in a region that once supported a great variety of animal life, including other dinosaurs like ornithomimids, ceratopsians and hadrosaurs. It is believed that they lived and hunted in packs.

Published on September 14th 2015 by admin under Reptiles.
Article was last reviewed on 16th September 2019.