Smilodons were ancient big cats that are popularly known as the ‘saber-toothed cat’. This is a genus under which three extinct species have been recognized – the S. populator, the S. fatalis, and the S. gracilis. The first evidence of their existence was found from fossils unearthed in the second quarter of the 19th century.

Pictures of a Smilodon 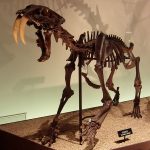 In 1830, the fossil of the Smilodon populator, a species of the genus Smilodon, was the first to be discovered and described in Brazil by Danish paleontologist, zoologist, and archeologist Peter Wilhelm Lund. In 1842, he named the genus as ‘Smilodon’.

Since the discovery of the first species, other members of the genus began to be documented as well. In 1869, the fossil of Smilodon fatalis was unearthed in North America by the team led by American paleontologist Joseph Leidy. In around a decade, in 1880, the remains of the third species, Smilodon gracilis, was discovered by American paleontologist and comparative anatomist Edward Drinker Cope. These prehistoric animals were distributed from Eurasia to North and South America. Out of the three, the S. fatalis is probably the most well-known species in North America. The creature was abundantly found in California’s Rancho La Brea tar pits.

Since their discoveries, the scientists were able to place the entire genus in relation to modern day fauna by phylogenetic analysis, though nothing much other than a handful of information about these animals could be retrieved from their remains. Like all the cats (big and small), the Smilodons too belonged to the family Felidae, falling under the order Carnivora.

Early DNA analysis placed these creatures within the subfamily Felinae, standard with the modern-day cats. However, recently, more in-depth analysis of the subject revealed that the Smilodons were not a close cousin of the felines (Felinae). They are rather members of a subfamily Machairodontinae, which evolved extant of the Felinae types.

Smilodons had a very massive size, with the Smilodon populator being the heaviest of all the three species, weighing more than 800 pounds. Smilodon fatalis was almost the same size as a modern-day lion, but slightly heavier. They were approximately 430-600 pounds. Smilodon gracilis was the smallest of the three thought to be about the size of a jaguar, weighing around 360 pounds.

The most distinctive features of Smilodons are their pair of large upper canine teeth that was around 28 cm long in S. populator, giving them the colloquial name ‘saber-toothed cats’. Out of the two types of such cats, viz. the short, broad-canine ‘scimitar-toothed’, and the longer, slender-canine ‘dirk-toothed’, the smilodons fall under the latter type.

Smilodons had the ability to open their jaws very widely at an angle of about 100° with the rest of their skull/head. Coat features like lion’s mane or tiger’s stripes are too unusual to predict from fossil remains; however, they possibly had either plain-colored coats or a spotted one.

There is very little evidence and quite a lot of debate among researchers about the exact behavior of this genus and its related species. However, like all felines, the Smilodon was also a carnivore, the biggest evidence of which is its pair of large and characteristic canine teeth.

Scientists also presume that they were ambush predators since they had stout, muscular forelimbs. They are thought to have been suddenly attacking and surprising their prey by sneaking up on them and kill them quickly. However, other groups of scientists debate upon this behavior. Since these large cats had physical resemblance with hyenas, they believe that the animals had the ability to chase prey over considerable distances, at least for some time.

The creatures probably preferred large herbivores as prey. The density of their population discovered in the Rancho La Brea tar pits suggests that the Smilodons might have been hunting in packs in order to take down such large-size prey.

However, the most mysterious part that intrigued the scientists is how these cats would use their oversized teeth. While some paleontologists believe that they utilized them like a knife, sinking the teeth into the flesh of the prey, others think, they would use the teeth to slice meat off from the carcasses of animals already dead. This, in turn, implies that they might have been scavengers as well. However, because their teeth were quite fragile, their owners were not able to consume the entire prey since they might then damage them.

Diet: What did they Eat

The size of all the teeth of the smilodon and the robustness of the skeleton suggest that their prey included large mammals like bison, horses, camels, giant ground sloths, and probably young mammoths and mastodonts.

Published on September 6th 2018 by staff under Mammals.
Article was last reviewed on 16th September 2019.