Pyrenean ibex, once commonly found in Southern France, Northern Pyrenees and Cantabrian Mountains, was one of the four subspecies of Iberian wild goat or Spanish ibex. This subspecies went extinct in early 2000. They were found in huge numbers even a few hundred years ago. However, by 1900 the numbers went down to less than 100, and after 1910, the number never went up above 40.

The taxonomy of Pyrenean ibex is quite controversial as the last specimen died before the researchers could properly analyze them. The last Pyrenean ibex was Celia, a female, found dead in the year 2000. 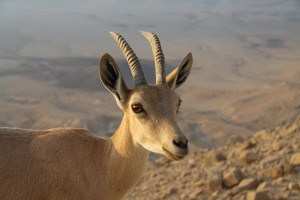 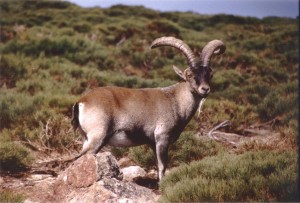 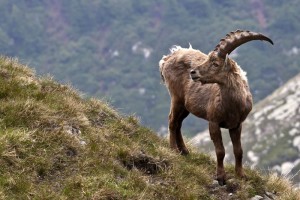 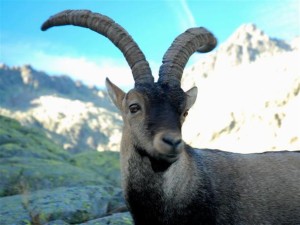 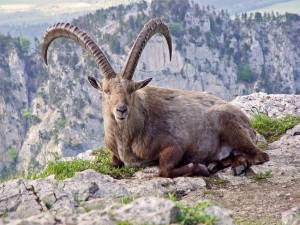 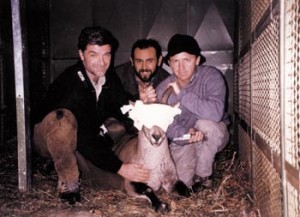 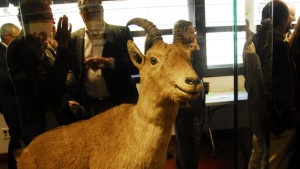 Male and female could be easily distinguished depending on the difference of their color, horn and fur. Males were grayish brown decked with black in several places like forehead, mane, and forelegs. They used to have short fur during summer while it grew longer and thicker during winter months. However, the hair on their neck remained long throughout the year.

Females could easily be mistaken for a deer. They were brown throughout summer. Unlike males, they lacked the black coloring. They were less colorful in winter. Young ibex’s color used to be like females.

The males had thick and large horns curving outwards. The horn surface had ridges that used to develop with age. Females used to have cylindrical short horns.

Pyrenean ibex was common in Spain, France, Portugal and Andorra. The last remaining specimens were found in Eastern and Middle Pyrenees, below 1200 meters altitude. This extinct mammal was abundant until the fourteenth century. Their numbers were quite staggering in the region till the middle of nineteenth century.

They preferred to live in rocky places with cliffs or trees interspersed with bush and scrubs. They also used to dwell in farmlands with little patches of rocks. This mammal was known to spread out and colonize quite fast.

There are several surmises regarding the evolution as well as the historical migration of this subspecies and its relation among its other subspecies. The genetic evidence affirms the theory that several Capra subspecies migrated to Iberian area at the same time.

In Spring, this species used migrate to more lofty mountains areas where they used to mate. Offspring was born in May. In winter, they used to migrate to places that are less covered in snow.

Definite extinction causes of Pyrenean ibex are largely unknown; but there are several hypotheses that float around – such as continuous hunting, their inability to compete with other livestock for food, diseases and infections caught from domestic animals and climate conditions.

Rivalry with domestic animals played a part in their extinction. They used to share a lot of their range with sheep, horses and domestic goats, mainly during summer days. It led to overgrazing and interspecific competition.

Pyrenean ibex were found in large numbers in the Pyrenees region, but the count gradually went down in the 19th and 20th centuries because of continuous hunting. In the latter half of the 20th century, small number of individuals survived in Ordesa National Park in Spanish Central Pyrenees.

In 1950s and 1960s, the global conservation program was brought in by introducing national game reserves and refuges to save ibex stocks. In 1973, the Pyrenean ibex was declared protected, check out this great site . A management plan to save this subspecies was put into place in 1993 when just ten individuals remained.

The first cloning attempt in July, 2003, ended in vain. The success came in January, 2009 when Pyrenean Ibex became the very first extinct animal to be resurrected. Scientists successfully implanted 57 embryos into surrogate female domestic goats. Just seven embryos resulted in pregnancies, and only one gave birth to a female Pyrenean Ibex. However, the newborn died after seven minutes because of lung related troubles.

Even though Celia provided great tissue samples, yet the problem remained as there is no male clone to breed with. One suggestion was to cross Celia’s clones with males of another Ibex subspecies, but that would not give birth to a pure Pyrenean ibex.

An ambitious plan suggests removing one X chromosome and add a Y chromosome from another existing subspecies would be able to give birth to a male Pyrenean ibex. However, this plan exists in theory only as available technology cannot turn this idea into reality.