The Irish Elk, belonging to family Cervidae, is an extinct mammal. In contrary to its name, the Irish Elk was neither an Elk (belonging to the same group as North American Elk or the European Elk, which is popularly known as Moose in Northern America) nor it was exclusively found in or around Ireland. DNA evidence suggests that it was actually a deer species. In fact, it was one of the largest deer species that have ever roamed on earth. Reason that the word ‘Irish’ has struck with the name of this species because their skeleton remains were mainly found in the peat bogs and lake sediments in Ireland.

In the past, phylogenetic research suggested the idea of a sister-group relationship between Irish Elk and Fallow Deer. But new morphological analysis has proved that the Irish Elk is more closely related to Red Deer.

This species thrived during a period known as Woodgrange Interstadial in Irish palaeoecology. They went extinct around 10000 years ago with Giant sloths and Sabre-tooth cats. Scientists believe that they lived for around 2000 years in and around Siberia even after it was believed to have gone extinct. 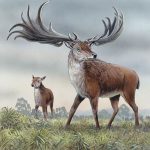 Their native range included Europe and northern Asia – from Ireland in the west to as far as Lake Baikal in the east. They were also found in some parts in northern Africa. A related form is known to inhabit China during Late Pleistocene.

Scientists, in their first description of this species, greatly confused it with the American Moose, while some other scientists thought that they were identical with the European reindeer. French naturalist Georges Cuvier first identified this species as totally different from North American Elk or Moose. His study of this species paved a way to understand the taxonomy of this species.

Megaloceros giganteus evolved throughout the Glacial periods – mainly during the Pleistocene Epoch. Structurally, they are considered as the heaviest known member of the ‘Old World deer’ (A division of the subfamily Cervinae – divided into ‘Old World deer’ and ‘New World deer’; and they are differentiated according to their foot structure instead of their geographical origin). Research works have shown that Megaloceros giganteus have evolved from M. antecedens.

Researchers had given several theories when it came to the evolution of their antlers. They had antlers of suitable size in correlation to their massive body structure. It is believed that the antlers increased in size under strong and constant sexual selection.

Males are known to use their antlers in combat with other male specimens. Some theory suggests that their horns were morphologically not well suited for battles. However, they were great for intimidating dominant rival males and attracting females. Stags are also known to shed their antlers during mating season.

The mating system of this species is not known. The sexual dimorphism via the antlers suggests intra-sexual combat, intra-sexual displays, large mating congregations and polygyny. In such a system, breeding should not be an issue irrespective of male/female ratio. Even if it is presumed that males with huge antlers died in an adverse environmental situation, it is very much possible that the presence of less dominant stags would have been perfectly suitable to deal with the mating void.

Available evidence suggests that one cause could not have been wholly responsible for the extinction of Irish Elk. A variety of factors played significant roles in different parts of its native range in wiping out this species.

Their antler size and sexual selection had always been the focus of discussion even when it came to the cause of their extinction. Fossil samples, collected from Ballybetagh bog, in Ireland, suggest that males and females went isolated from each other during winters. It suggests that they had behaviors such as polygynous and rutting mating systems. Recent studies suggest that the reproductive energetics of females could be a contributing factor in the elimination of this species.

Another theory is habitat degradation that triggered a nutritional stress, mainly among males. Their adaptation to mineral metabolism (as high amounts of phosphate and calcium compounds are important to form antlers) in natural diet altered with the loss of habitat. But, the most recent fossil specimen, found in Siberia, dated around 7700 years ago, showed no signs of nutrient-related problems in that part of its range.

Scientists argue that several other factors like hunting by people, ecological change and virulent disease triggered its extinction, like it happened with other prehistoric megafauna.

Published on July 3rd 2015 by staff under Mammals.
Article was last reviewed on 16th September 2019.