The Caspian tiger is a Panthera tigris subspecies believed to have extinct around 1970s. It was one of the biggest cats that have ever lived on earth. This sub-species was declared extinct by the IUCN (International Union for Conservation of Nature) in 2003. 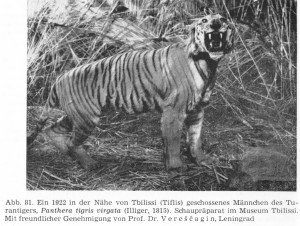 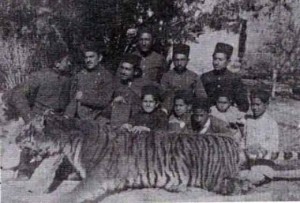 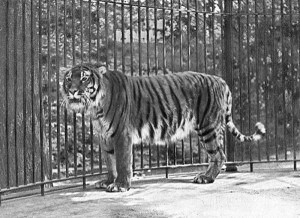 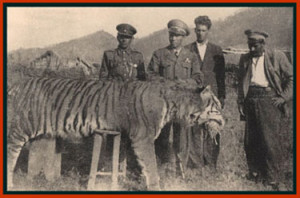 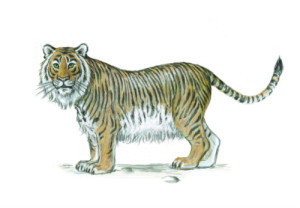 The yellow color of its pelage was more uniform and brighter than its Far Eastern sub-species. It had narrower stripes of cinnamon or brown shades. The difference between their summer and winter coat was striking. The winter pelage was more pallid with less distinct patterns.

Their patchy distribution range included south and west of the Caspian Sea – from Turkey, Iran and east towards Takla Makan desert of Xinjiang, China. They were also found in Turkestan and Afghanistan.

Occasional sighting claims come from remote parts of Afghanistan and distant forested areas of Turkmenistan. But experts did not find any solid evidence to prove their existence. The reported paw marks of Caspian tigers could have been of Persian leopards. Some reports suggest that the last specimen was captured and killed in northeast Afghanistan in 1997.

This sub-species was already vulnerable because of their restricted range – held in within watercourses surrounded by huge expanses of desert. The whole extirpation was triggered by several circumstances.

They were ruthlessly killed in large numbers by hunting parties and also by Russian army who were used to clear predators from potential agricultural lands and settlements near forests.

Increasing human population near watercourses and deforestation also played a crucial role as it not just recoiled the range of Caspian tigers but it also shortened the number of their prey species in the middle of the nineteenth century.

It is also believed that natural calamities and diseases played a role in their extirpation.

Tigrovaya Balka, the very first protected region to save Caspian tigers, was established in Tajikistan in 1938. It was the last stronghold of this sub-species in its range. The last specimen spotted in this region was in 1958.

In early 21st century, scientists from Hebrew University of Jerusalem, U.S. National Cancer Institute and the University of Oxford, collected tissue samples from Caspian tiger specimens that are kept in museums throughout Europe and Asia. They examined the phylogenetic relationships of Panthera tigris subspecies and observed a noteworthy similarity between Caspian and Amur tiger. Depending on the assessment, they said that the ancestors of these tiger subspecies colonized Central Asia less than ten-thousand years ago.

A study suggested that a feasible tiger population of around hundred individuals would need a region of around at least 5000 km2 with rich prey populations. But, such habitat is not available at this point of time.

Published on May 20th 2015 by staff under Mammals.
Article was last reviewed on 16th September 2019.