American Cheetah is an extinct genus of two feline species that were endemic to North America. Their existence only came to be known from their skeleton samples. Species belonging to genus Miracinonyx were larger compared to modern Cheetah found in Africa. In fact, their size was similar to a cougar. 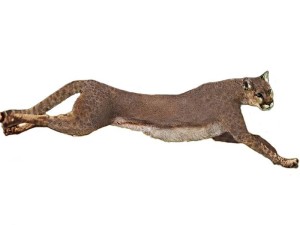 Miracinonyx trumani – Their skull and tooth morphology was more similar to the modern day Cheetah. They were primarily found in parts of Western America. It is assumed that they fed on hoofed plains’ animals like the pronghorn. 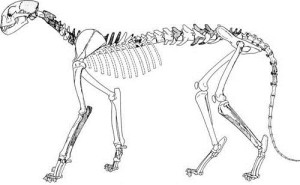 With shortened faces as well as nasal cavities spread out for increased oxygen capacity, the appearance of species belonging to genus Miracinonyx were similar to modern day Cheetah. They also had legs properly proportioned for swift running. These resemblances may not all be inherited from one common ancestor. Instead, it is a result of either convergent or parallel evolution.

Research works into this genus came with different results. Earlier it was believed that the American Cheetah was an early Cougar representative. In 1970, it was reclassified as the closest relative of present-day Cheetah. This theory suggests that Cheetah’s ancestors drew apart from the Puma origin in the Americas and came back to the ancient world.

Another research re-analyzing morphology and studying mitochondrial DNA has asked for a reversal of its reclassification. It said that the American cheetah acquired cheetah-like characteristics with convergent evolution. However, this genus is most closely related to Puma. Therefore, the hypothesized American origin of the modern day Cheetah is ambiguous. Scientists believe that the present day Cheetah have originated from a Cougar-like animal from the New World or the Old World.

It is believed that Miracinonyx trumani and Cougar have developed independently from a Cougar-like animal around three million years ago. However, it is not clear where Miracinonyx inexpectatus fits properly. Some believe that this species was a more like an archaic version of Miracinonyx trumani.

Their extinction causes are not exactly known, but there are some hypotheses like climate change, shortage of food and human pressure that are believed to have triggered their extinction. American Cheetah went extinct at the end of the last ice age – the same time when American lions, mammoths and horses died off.

Published on June 26th 2015 by staff under Mammals.
Article was last reviewed on 16th September 2019.